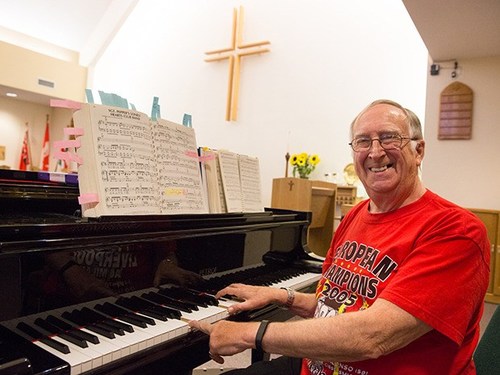 Brian Richardson serves as Director of Music at St. Peter, Lakehill. He shares the following reflection about his journey with Christ thus far:

"Born in Liverpool, I was privileged to study with John Lennon in high school, later with Dudley Moore at Oxford, and finally with Sir Simon Rattle, later to be conductor of the Berlin Philharmonic Orchestra. I took my Master`s degree in Modern Languages at Oxford, as well as degrees in Music and Teaching at the universities of London and Liverpool respectively. My work in church music began when I was a teenager, continued in Alberta after my wife and I emigrated, and has now exceeded 50 years – I must have done something right!

A huge influence for me has been 10 years or more spent in Duncan and Victoria working with our current bishop, the Rt. Rev. Dr. Logan McMenamie. He and I together developed musical directions that embraced the modern musical repertoires of such luminaries as John Bell, Marty Haugen, David Haas, Robin Mark, and the Jesuit Brothers such as Michael Joncas. It is my firm belief that this is the way for modern church music to go; although we must never forget the remarkable heritage of centuries of Anglicanism.

If music be the food of love, there is no doubt in my mind that it is a most fervent aspect of our worship, and must be the very best and most meaningful we can offer, every time we gather together as one body. It is such a powerful medium for uplifting our collective hearts. I hope I may be able to continue as a humble part of this for many more years."